Dance When You’re Doubled Over

Chongqing has a few nicknames: “Fog City” (the polite version of smog city), “Furnace” (that’s more like it), “The City of Mountains” (the term “urban hiking” truly comes alive in Chongqing), but the literal meaning is “Double happiness” in Chinese. The story of double happiness translates into a land of second chances. I think it’s related to the hardship of the Sino-Japanese war (Google it, some of the pics look like a real-life Battleship Potemkin, it’s gross) and the people wanting to start over again and rebuild bigger, and better after so much hardship. Chongqing, I can relate.

The city was my first one out of Western China and the start of my route back east by the Yangtze River. I was psyched to be out of a Chinese capital city and in a quirkier urban jungle. The guidebooks said that the city had a different feel than other Chinese cities. I figured I would end up spending a week in Chongqing as I did in Chengdu, but I was ready to go after a day and a half. But I stuck it out for the four days, like the hardcore explorer I was. I didn’t know why the thought of a unique Chinese city excited me so much. I love real China. But I bused into the city enthusiastic for more big-city action and was transported to a smoggy mess. Chongqing is split by the Yangtze River and the numerous bridges and skyscrapers by the sea are one of the famous things about Chongqing, along with the new beginnings history thing and the awesome hot pot. I didn’t even know what shade of brown/yellow the river was, but it was disgusting. Recently the river turned red, and I wasn’t surprised. In the cab ride to the Yangtze Riverside Hostel, through the smog and fog, I noticed a piece of architecture similar to the twin towers on the other side of the river. Once I started my exploring the next day I saw that all over, the city campaigned to be like New York. The city center was even called Times Square (No Bob Dylan and Don’t Look Back, not even Tom Cruise and Vanilla Sky…instead lots of H&Ms, Starbucks, and China Mobiles). Sorry, Chongqing, you were like NYC in pretty much no ways, but nice try.

My new city navigation routine (aka random wandering) didn’t fly in Chongqing. Having arrived from Chengdu (with a pit stop in Zigong…haven’t heard of it you say? It’s pretty cool, you should go) with it’s ringed roads, sleek subway, city squares, and people’s parks, I forgot how to walk in a city that wasn’t gridlocked. but I spent my four days in Chongqing frustrated, panting and lost. But it wasn’t all bad. I was only physically lost most of the time, wandering through random side streets in an attempt to find my way back. That’s pretty much the only kind of “lost” I can handle. 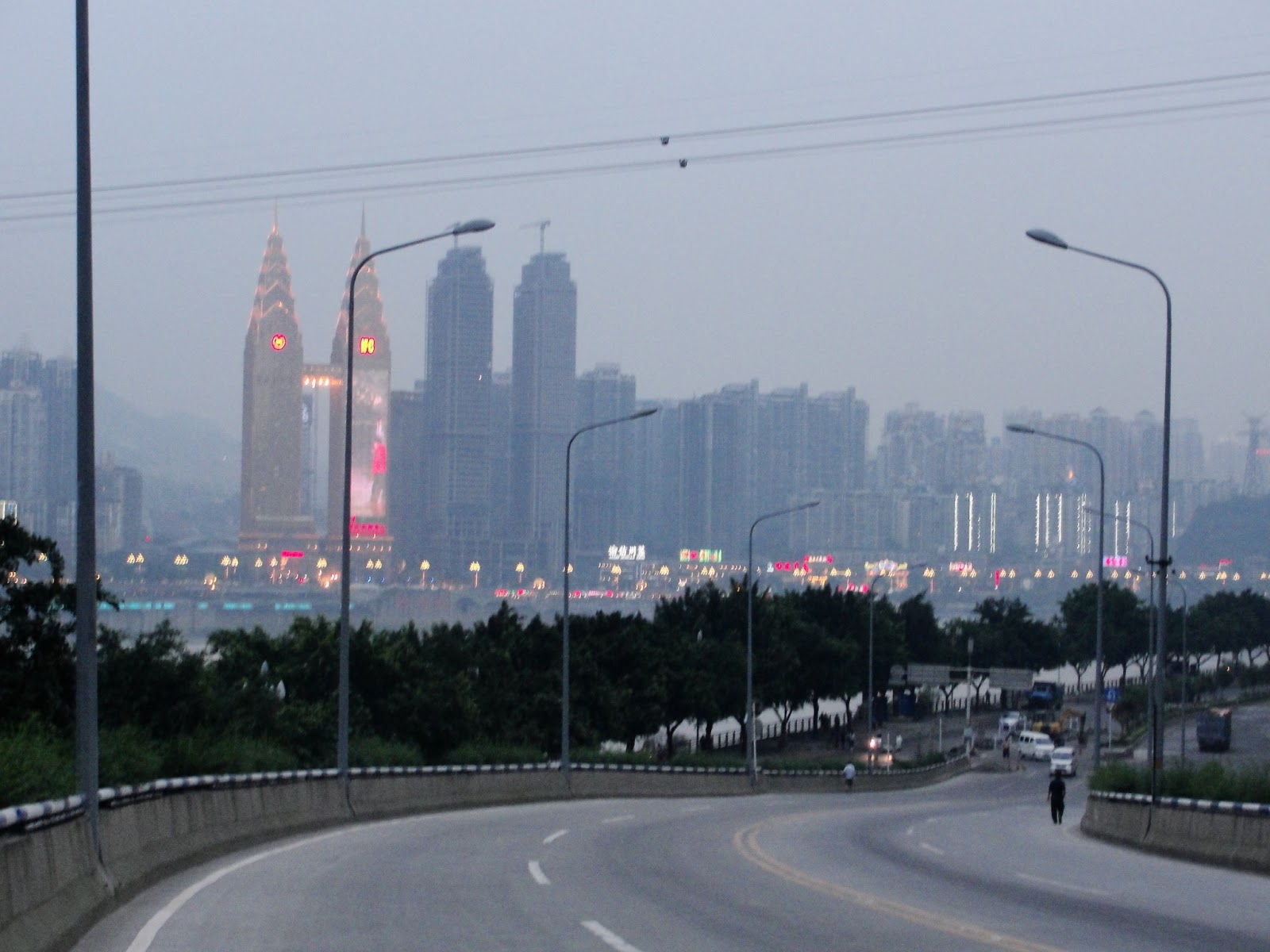 Another thing is that Chongqing probably would have been better if it wasn’t under construction. 75% of the city was being demolished and rebuilt. That’s real China. As I type this sentence another sleek slab of concrete is being placed by the riverside. A bridge was being built in front of my hostel and it was a struggle to even have a Skype call to home. The ships leaving the dock for the Yangtze river tours and the sound of drills all day made the hostel a little less than ideal during my stay. But even though the view from the hostel terrace was of mostly a giant crane, it was still pretty awesome. I’m a sucker for a skyline.

I think my experience in Chongqing was similar to many people’s overall experience in China. They go in with high expectations and are a little thrown off guard at first. They eat good food and talk to interesting people. They see animals in places they hoped to never see. They walk around trying to find something cultural and scenic with little results, and they start to wonder what all the hype is about. And if they stick around long enough they get the chance to something inspiring, maybe something they wouldn’t have found in another part of the world.

My third night in Chongqing, I caught myself alone by sunset wandering around thinking about what to do with the rest of my life/what I’m gonna eat for dinner, as I tend to do when I’m sans travel buddies, and for the first time in a while, I freaked out. There was no time for that nonsense when I was doing yoga in Dali, drooling over the skyscrapers in Hong Kong and pushing my way to the front of the line to buy a train ticket in different parts of the Mainland. But right there in Chongqing, the first stop of my journey east, shit was getting real. The better half of my China trip was over and I didn’t have anything lined up and my bank account was slowly but surely telling me to GET A JOB YOU BUM, FEED ME! A million thoughts came to all at once and when that happens they tend to topple over each other and it’s chaos.

Sidebar: The mid-age/elderly women of China like to join together every night in a park or public square and dance. There’s different styles from aerobic, to a slow-paced kinda jazz-exercise but most of it kinda looks like one big waltz. I feel like calling it “square dancing” doesn’t do this phenomenon justice. Sometimes the whole family goes together to the park and everyone joins in. From a bystander it’s like witnessing a flash-mob only it’s every night so not that big of a surprise, and the choreography isn’t as intense. From what I’ve seen it happens in every city all over the country. For a country that lacks a lot of arts and culture; it’s rich in its history but the modern-day world of factory towns leaves time for little else, it’s always a pleasant surprise to see this public display night after night. Frankly, I was getting a little bored with it. I was amazed when I first saw it and talking to other travelers the nightly dance sessions were always at the top of people’s favorite things about the mainland lists. I never saw the dance mobs more so than in Chongqing. Even a motorbike parking lot in the middle of the city served as dancing grounds.

So in the middle of my freak out, I stumbled upon another dance party just as my head was about to explode. I sat and watched. Seeing hundreds of people commit so fully to the two-step almost gave me raccoon eyes. Nothing like a good ol’ fashioned flash-mob (with Chinese characteristics) to put things into perspective. I watched all these people from this giant and crazy country that I chose to explore bust a move and I calmed down. It’s all good. And I made my peace with Chongqing and all that it was; even though it’s not what I had wanted or expected, but got the chance to love anyway.
Things weren’t so bad, after all.

On My Way Across the Black Sea

What time zone am I in again? Where’s the coffee? Am I really at the Moscow Airport (and am I seeing a TGIFridays in Terminal

Free Yunnan? What I Learned About China’s Wild West

The south of China quickly led me to the southwest of the Mainland: Yunnan province. Currently the most traveled and the most awesome of China’s

Every Thursday at the Jade Emu Guesthouse in Dali there’s a pool tournament. Seems cliche but beautiful strangers seem to come out of the woodwork

This error message is only visible to WordPress admins

© Jenny is Free 2022 All Rights Reserved