I left Canada in May on yet another one-way ticket. Here’s what I’ve done so far:
New York for a day. Central Park, Koreatown, tacos in the Lower East Side. Slept in Queens and said goodbye to friends at the Times Square subway station. Hopped on a bus to Washington D.C. Spent the days in museums and the evenings talking about our heartbreaks over cornbread and cheap American beer. I also had the privilege of shopping at Trader Joes. Twice.
Then it was back to New York on the night bus. I didn’t wake up for our scheduled stop in Baltimore. Standing on the corner of 42nd and 8th on a New York Friday morning, I boarded the shuttle to JFK Airport. On the way, I realized I didn’t know what terminal I was supposed to get off at. How many terminals does JFK have? 4? 5? I thought. I’m flying international, so maybe Terminal 3? That’s usually a safe bet. I got off at Terminal 3. I was right. I headed towards the Japan Airlines check-in counter. I was on my way.
A few days in Bangkok. Not even a day and a half into it and I was wearing baggy pants, a tank top, and sunglasses complete with the traveler’s side-braid in my hair. It was 35 degrees. I had to get pictures taken for my visa to Myanmar. I paid 10 baht for a pack of four photos just outside the embassy. I still have one photo left. When I noticed it the other day I realized that my eyes in the photo are filled with hope for the future. It was too early for regrets, too soon in the game to second-guess. For the rest of my time in the big city of Bangkok, I wandered around temples in the middle of the day, got lost on the Skytrain, and made new friends.
In Chiang Rai, I found a piece of paradise. Arrived by midnight and when I woke up in the morning, in my new room on a floor that I shared with Nim, my new and almost only friend in Thailand, I walked out to the deck to look at the view. All I could see was blue and green. I could see Burma. I heard roosters crow. I could see tiny huts and the smoke coming from the roofs as the village people who burned their garbage. At that moment I thought anything was possible.
*I know this is what everyone says after they come back from a volunteer project, but I really mean it. I might have gone there and entered their world to help but of course, they helped me much more. I will go back and visit the kids again, and I just hope they remember the songs I taught them.
I wasn’t excited to travel alone in Myanmar. I didn’t want to leave the village. Then one quick flight from Chiang Rai to Yangon (via Bangkok) and I had no choice but to adore it. I spent sixteen days traveling around that fantastic country, and it was some of the best memories that any traveler could hope for. Myanmar is captivating. Myanmar is still “exotic.” Myanmar is beautiful. I found that people there seem to be engaged in a national dialogue for unity and a passion for democracy. That was probably one of my most favourite things about Myanmar.
A Burmese taxi driver took me across the border and back into Thailand for another 30 days. My passport stamped and 5000 chets later, I was off on the bus to Sukothai. Then it was Pai, then it was Chiang Mai. I drank fresh juice and coconut every day and walked in the sunshine, exploring different Buddha ruins and meeting friendly people from Thailand and around the world. And I didn’t even get to the touristy southern Thailand, with all the beaches and parties!
Also, in Chiang Mai one morning I sat in a cafe for breakfast, so quiet and cute and decorated with old tea sets. I had what was probably the best coffee and pancakes in my ENTIRE LIFE! So fluffy (pancakes), so rich (coffee), and so Chiang Mai.
I spent a week working at a dog shelter in the countryside, part of the Elephant Nature Park (ENP). When in Thailand please don’t ride an elephant. When they say “sanctuary”, it’s really not. When they say “eco-tourism” it’s really not good for anybody. One of the only places in the entire country of Thailand, and all the elephant riding and all the eco-travel companies that come along with it, ENP seems to be one of the only places which take the animal to heart. It’s a place started by people who literally walk the streets and take in animals who are being abused. Dogs are rescued from floods, elephants are rescued from begging in the streets and training camps (and yes, some unethical “sanctuaries”), and they get to live in a place with people who care for them.
People at ENP care about animals over profit. People are activists. I learned so much from the amazing people who work there. And when I think about all the terribleness in this world (and we all think about that a lot of the time, don’t we) I know that if places like ENP exist, we aren’t doomed just yet. 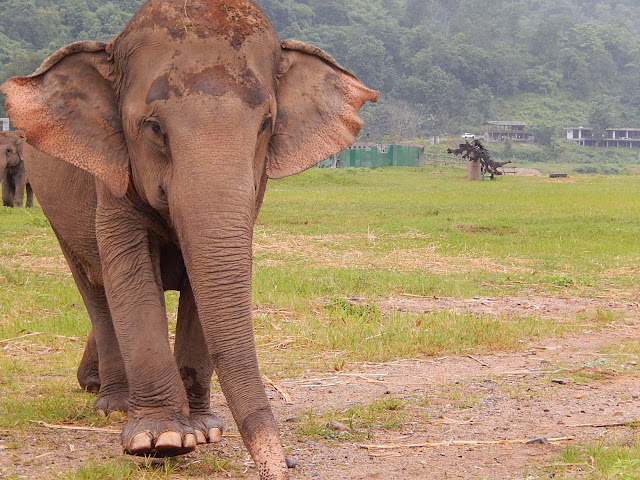 I was eager to move on, I don’t know why I just was. I guess I’m used to moving. A big part of me wanted to hang around. I could have figured it out. I could have found a part-time job and sorted out the details. If only I’d taken that extra breath and asked myself what I really wanted. That’s how places like Thailand work. If you allow them, they will move you and change all the plans you had for a fabulous life. Sometimes you just gotta take it in and celebrate the beauty around. But instead, I left Thailand (on the exact last minute which my passport stamp allowed me) for Hong Kong, with hopes of getting to China, to the booming capital of Beijing to work, eat, play and be merry. More on Hong Kong in my next post. It’s just too much love for this post.
After three months on the road, I found myself (and my luggage) on the corner of Tian’anmen Square and Qianmen hutong. In Beijing I ate (some questionable things), I definitely worked, I played a little, but the experience wasn’t all that merry. China plays hard to get. China makes you work for their affection. It’s all a game, and I was in no shape to play it. I’ve been all around China. I’ve lived in small-town China. A big part of me adores the feisty Mainland. Sometimes there isn’t anything in the world better than Chinese hospitality. And a bigger part of me knows that I’ll be back someday. Just not today.
So I took refuge in another republic; the Republic of Korea. In the care of old friends, familiar smells and breathtaking hikes (even if it’s just to the top of the Seoul Tower) I have found some contentment again. I don’t have any exact plans, but with Americanos in the morning, walks around the crowded streets and lots of kimchi along the way, I know I’ll be fine.
Now, it’s been six months on the road. In the afternoon today, I walked up to Namsan Park. Along the way I noticed a little shop selling candles and diffusers. Everything looked handmade and it looked warm inside, so I went in. The shop owner spoke a little English (and I speak a little Korean) and was pleasantly surprised to see a foreigner browse his shop. After looking and smelling a lot of his organic soy wax candles I noticed a few beautiful stone necklaces. There were big turquoise ones, with a straw-like chain. So organic and so cute. I noticed the smallest necklace of the bunch, with a glowing quartz stone wrapped in the straw. As I picked it up the shopkeeper pointed to it and said to me “for happiness”. So I bought myself an anniversary present. And of course, he gave me a little tea-light as an extra gift with my purchase. Wherever I am, I will be happy. I walked the afternoon away up to Namsan hill, then down to the city center of Seoul, eating kimchi-jigae for dinner and finishing the last of my Christmas shopping. I put on my new necklace right away, for happiness.
Here’s to happy anniversaries, in whatever form they may take.

Song-Kul and Other Adventures by the Alpine Lake

It was my 10th experience in a yurt during my time in Central Asia when I checked into my last one (thus far) while up by Song-Kul,

If you’ve met me somewhere in Europe this past summer, or spoken to me since I’ve been back in Montreal, I have probably told you

In Thailand, there are so many reasons to celebrate. Like Kru’Boom (Kru is Thai for “teacher”) told me one morning at her desk, “Thailand has

This error message is only visible to WordPress admins

© Jenny is Free 2023 All Rights Reserved